Based in Stirling, Central Scotland and with ample free parking facilities, we are also a fully functioning commercial business which allows you to experience, first-hand, a little bit of an insight into the upholstery industry whilst you are learning and training on our courses. 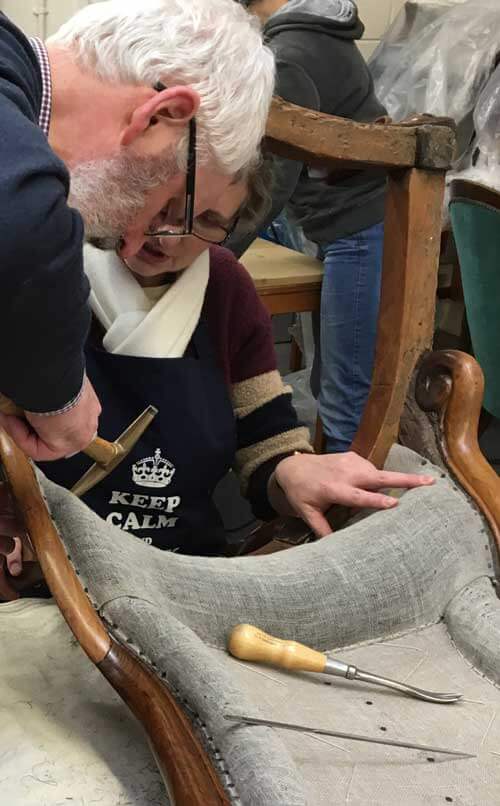 A time served upholsterer with over 40 years’ experience, James served a six-year apprenticeship in the early ‘70’s, trained by an ‘old school’ journeyman for an established traditional upholstery firm in Edinburgh. Over the next 15 years he further expanded his knowledge in various upholstery and designer workshops, both in Edinburgh and working in London, added and honed soft furnishing and machine sewing, specialising in tailored loose covers. James’s in-depth knowledge of traditional upholstery lead to his working in local Scottish castles (still does when time permits) and historic homes restoring period furniture including Holyrood House and Balmoral. Highlights during that time included the installation of fabric walling in both the Scottish National and Portrait Galleries in Edinburgh and assisting in the upgrading of the Hunterian Gallery and Willow Tea Rooms in Glasgow.

James has run a successful upholstery business, Interior Furnishings, in Edinburgh since 1986. A member of the Association of Master Upholsterers and Soft Furnishers and Chairman of the Scottish Branch for a short period after Sandy Stewart retired from the post. His finished work is to the highest standard of craftsmanship.

Following a move to Stirling a few years back to be nearer a growing family and with a view to semi-retirement, he decided to pass on his knowledge and initially established the Upholstery Craft Training Centre Scotland Ltd in 2014 specifically for AMUSF accredited courses. Currently he also delivers daytime leisure classes in upholstery and soft furnishings and is developing work experience sessions for post Stage3 Upholstery Diploma graduates.

Please fill out the box below to receive the latest news from Upholstery Craft Training Centre Scotland.

We have a number of courses you can sign up for, click the button below to browse

Show me the courses